Ryan Cheung has just accepted a scholarship to a very prestigious tennis university in the US. Ryan who spent is formative years in Hong Kong and coached by Graeme since the age of 7yrs has represented Hong Kong at World Junior Tennis and Junior Davis Cup.  Now attending Irvine High and and member of the University High School 2008 CIF Championship team, has accepted a scholarship offer from coach Trevor Kroneman and UCI to play tennis for the Anteaters the next four years beginning the fall of 2010.

Ryan Cheung, ranked #8 nationally from the USTA B18s Doubles Ranking List published on 9/3/09 had a great run in the doubles draw with partner Mousheg Hovhannisyan of North Hollywood, registered five main draw wins and finished fourth at the USTA National Hard Court Championships at Kalamazoo recently.
“There is no substitute for being close to home, the beaches, Irvine and Orange County,” said Ryan. “Closer to home means my family can watch me play.”
“To be under the tutelage of Coach Kroneman the next four years and the chance of going to a great academic institution and be united with my former SCTA Sectional doubles partner Oscar Fabin Matthews again is definitely a great opportunity for me. We won the SCTA Sectional Doubles in 2007 when I was 16 playing in the B18s division.”
Well done Ryan and Good Luck! 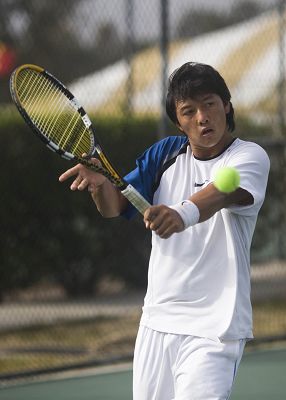 0 0 0
Previous : Thoughts on the correct “mind set” by Happy Bhalla
Next : Stretching by Adrian Montesinos